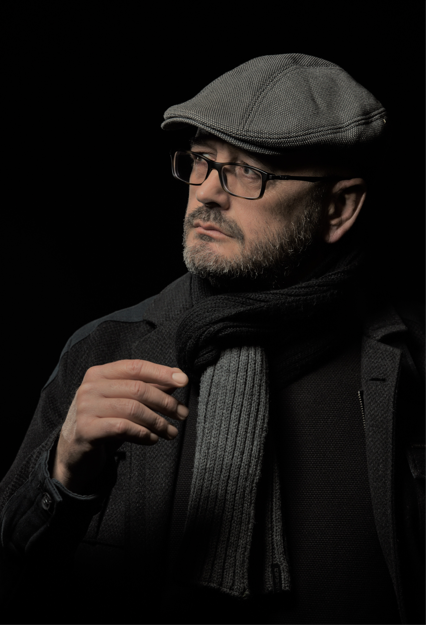 Graduated from the Faculty of Dramatic Arts in Cetinje in the class of prof. Branimir Popović. In his theatre career so far, he has performed in the plays “My Daughter”, “The Learned Ladies”, “Marriage”, “Equinox, “The Winter’s Tale”, “Who the F… Started All of This”, “The Powder Keg”. In the Royal Theatre “Zetski dom” he performed the roles in the plays “One Flew Over the Cuckoo’s Nest”, directed by Diego de Brea, “Sexual Perversity in Chicago”, directed by Zoran Rakočević, “Tobelia, mimicry”, directed by Mirjana Medojević and “Beneath the Two Suns”, directed by Boris Liješević.

He is the author and presenter of the cult radio show “Emisija na Radio”, which has been broadcast on Antena M for more than 20 years. He is one of the authors and actors of the TV series “Emisija koja ide na televiziju poneđeljkom uveče oko 9”, produced by TVCG from 2004. He represented Montenegro at the Venice Biennale in 1999, with a collective work entitled “Friendship” (installation and performance). Together with other members of the organization The Books of Knjige (TBOK), he recorded the music album “My Homeland” in 2000. He participated in two Cetinje Biennials in 1992 and 1993 with art installations. With the installation “Gallows”, he participated in the project “Chain of Discovery” curated by Svetlana Racanović. In the first film of the organization TBOK “Cases of Justice” filmed in 2016, he played one of the main roles.

The next projects of our Theatre in which he will participate is the play “Groupie”, directed by Ana Vukotić.